We here at Rosie on the House were blessed with a fantastic inside look at the journey our Arizona Water embarks on to make its way into our homes. Rosie and Romey were able to take a special helicopter and facility tour of Central Arizona Project (CAP) to gain that inside look. Just like our past special tours there was so much to see and learn, it would take forever to share it all with you, so we condensed it down to a few takeaways.

As listed on the CAP website: “In the early 20th century, Central Arizona Project was a shared dream of Arizonans; a vision of water security and stability for future generations to enjoy their quality of life in a desert. Now that the 336-mile long water delivery system is a reality, the leadership of CAP is responsible for protecting and preserving what past generations were able to fund and build.”

Of the 4 billion dollars it took to build, 1.3 billion was state money, the rest was federal. As the canal sits today, it is 80 feet across the top, 18 feet deep, and 30 feet across the bottom. The size varies overall and gets smaller the farther down the system water travels. The water in the canal flows at a rate of about 2-3 miles an hour. To control all that water, there are check gates that are controlled by 9 microwave towers set up along the system.

Along the canal, there are 29 wildlife crossings; bridges designed specifically for wildlife to use. In addition, local fire departments use CAP for water rescue practice ahead of monsoon season.

“Central Arizona Project (CAP) is Arizona’s single largest resource for renewable water supplies… More than 5 million people, or more than 80% of the state’s population, live in Maricopa, Pima, and Pinal counties, where CAP water is delivered. CAP carries water from Lake Havasu near Parker to the southern boundary of the San Xavier Indian Reservation southwest of Tucson. It is a 336-mile long system of aqueducts, tunnels, pumping plants and pipelines and is the largest single resource of renewable water supplies in Arizona.” CAP – About Us

CAP is a stand-alone entity overseen by the Central Arizona Water Conservation District Board of Directors.

What Percentage of Our Water Comes From the CAP?

CAP is designed to bring about 1.5 million acre-feet of water from the Colorado River to Central and Southern Arizona every year which is currently around 35% of the state’s annual water usage.

How Much Water Are We Actually Using?

1 acre-foot of water contains 325,851 gallons. According to Water Use It Wisely, as of August 2019 the average individual in Arizona uses 120 Gallons of water per day. So depending on how many people living in your house will impact how long that acre foot will last for:

Electricity’s Role & Where It Comes From

CAP is Arizona’s #1 consumer of electric power; 60% of that is at the original Mark Wilmer pumping station on the Colorado River where six, 66,000 horse powered pumps extract Arizona’s allocated water out of the river. Through November of 2019 the main source of that power was the Navajo Coal plant until it was decommissioned. Future power sources have been secured, but are still not public.

The Central Arizona Project (CAP) is an engineering marvel that moves water from the Colorado River near Parker, AZ down through the heart of Arizona into Mexico. We explain how the system works, predicting and delivering required allocations for agriculture and cities. Plus The Union Pacific’s ‘Big Boy’ steam engine’s trip through the state. See below for extended interview & CAP helicopter tour video.

When is Most of the Power Consumed & How is it Protected?

Like all consumers of electricity, CAP tries to minimize its power bill on a daily basis. To minimize demands “on peak” and during planting seasons when hundreds of thousands of acres are being irrigated by our farmers, CAP pumps water when rates are low and use Lake Pleasant as a large storage basin to meet supplement high water demand periods. 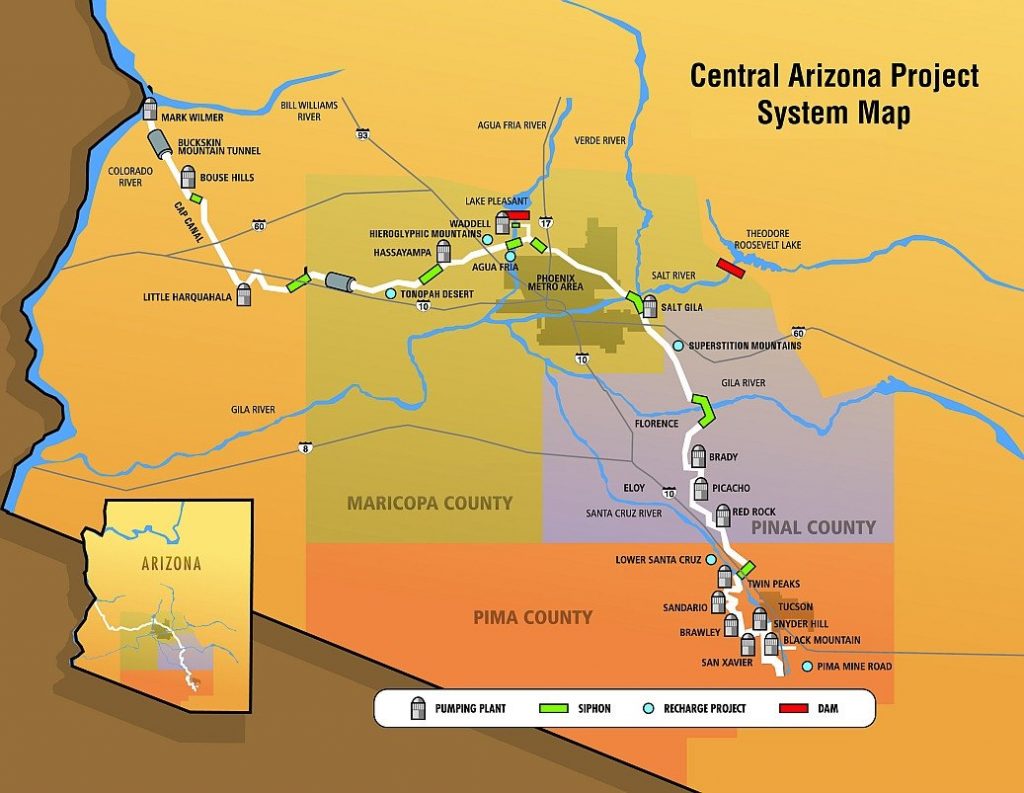 The Mark Wilmer Pumping Plant was the first plant built in the CAP system, with construction beginning in 1973.

According to Scott Bryan, CAP’s Senior Biologist, “the fish that we stock into the CAP for vegetation control are Ctenopharyngodon idella, better known as Grass Carp. They are a type of Asian Carp that have an appetite for aquatic vegetation. All Grass Carp stocked in the United States must be certified as triploid (sterile) so that there is no chance for reproduction and subsequent overpopulation. The process for sterilization is relatively complex and occurs in the egg stage just after fertilization. They use either heat or pressure to create an extra chromosome (triploid) which effectively makes the fish sterile. All fish are tested by the US Fish and Wildlife Service prior to release from the hatchery to ensure triploidy.”

“A majority of grass carp in the U.S. are produced in Arkansas, which is where CAP gets its fish. The fish we stock are about 18″ in length (2-3 years old) and are effective for vegetation control for about 4-5 years. We stagger stocking in the canal to make sure that we have an adequate number of fish in each pool to control the weed growth. To date, they have been an extremely effective biological control for [CAP].”

As stated on CAP’s article ‘A Spooky Halloween Tale: Invasion of the Weeds’, “aquatic weeds are a serious issue for the plant’s 66,000 horsepower pumps. The large, twisting weeds wreak havoc with the pumps and can affect the sediment pulling into the CAP system… A successful innovation has been a “weed boat” that allows crews to intercept and wrestle the weed mats, before they reach the plant intakes. These mats can be six feet deep or more.”

The CAP emphasizes canal safety. According to an article on KnowYourWaterNews.com:

“At Central Arizona Project (CAP), the safety of our employees, neighbors and wildlife along the CAP canal system is among our highest priorities. For this reason, the CAP canal is fenced, posted with ‘keep out’ signs and patrolled and monitored by our Protective Services agents. All of our employees keep a vigilant eye out as they travel and work along the CAP canal. It is a significant effort for a system that stretches 336 miles from the Colorado River at Lake Havasu to our southernmost customers near Tucson. However, it’s an effort that we undertake to safeguard our infrastructure and water supply, and discourage unauthorized and unsafe use of the canal.”

We would love to give a big thank you to all that were involved in the tour. Everybody was very helpful and knowledgeable along the way.

DeEtte Person & Crystal Thompson: CAP Communications and the ones who helped us with research and arranged for the aerial view of the CAP Canal.

The CAP’s Gordon Meyers talks about the C.A.P. Machine Shop. They handle all of the repairs, overhauls, refurbishing and fabricating along the entire system. In some cases, they can make the parts needed.

Seven Steps To Big Savings On Your Electric Bill

HOW TO STOP LEAKS BEFORE THEY START

HOME IMPROVEMENTS SUGGESTIONS FOR EVERY BUDGET

BAD ODORS: GET RID OF THEM!