Finding Your Marbles at Marble Canyon

Named because of its colorful rocks and cliff walls, Marble Canyon is located just below Glen Canyon Dam and extends from the Colorado River to the confluence with the Little Colorado River. Along with Lees Ferry, Marble Canyon marks the beginning of the Grand Canyon at its most western point. 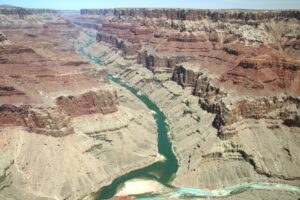 The cool waters of the Colorado River offer a stunning contrast to the ancient rock walls that rise to form the majestic Marble Canyon, a prelude to what will give way to the Grand Canyon downstream. A veritable southwestern paradise, Marble Canyon is a sightseer’s delight. Located just beyond Lee’s Ferry along the river, Marble Canyon is a gorgeous gateway to the one of the most extraordinary places on earth.

A Brief History of Marble Canyon

Marble Canyon marks the western boundary of the Navajo Nation. It is also well-known for the Navajo Bridge, where US Highway 89A crosses the Colorado River. 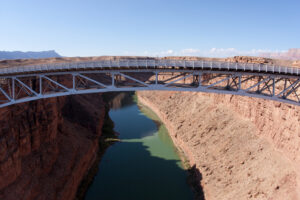 Despite its name, there is not a lick of marble there. John Wesley Powell named the canyon knowing that, but thought the polished limestone looked like marble. “The limestone of the canyon is often polished and makes a beautiful marble. Sometimes the rocks are of many colors – white, gray, pink, and purple, with saffron tints,” he stated.

Marble Canyon is the site of one of the last great proposed dam projects on the Colorado, the Marble Canyon Dam. Proposed and investigated in the early 1950s by the United States Bureau of Reclamation, the proposal met substantial opposition, notably from the Sierra Club, when a revived proposal was considered by the state of Arizona as part of the Central Arizona Project from 1965 to 1968. The proposed dam was finally abandoned in 1968. Exploratory holes, which were drilled in the Redwall Limestone of the canyon walls in an early phase of the abortive project, can still be seen at Mile 39.2.

Be extremely cautious about the monsoons. The clouds will roll in quickly. Don’t be so committed to your hike that you refuse to recognize a dangerous situation. Northern Arizona is an incredibly diverse area with many things to do and see. When weather threatens, postponing your hike for a day or two and finding something else to do is a wise decision that could save your life. Be willing to change your plans.

This is an area where you need to dress in layers. Wear a hat and sunscreen. Bring a lot of drinking water. If taking a tour, ask the touring company what you should bring.

Things to Do & See 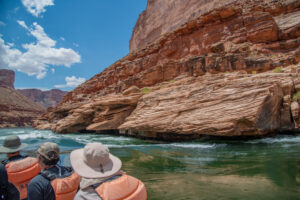 River rafting is one of the most common activities. Lee’s Ferry is a common launching point for river runners starting their journey through Marble Canyon and then onward to the Grand Canyon. There are many rafting options and companies to guide you.

Keep your eyes peeled for the California Condor. Only several hundred of these birds are still in existence, and many have been introduced into the wild at Glen Canyon. They have a wingspan of nearly 10 feet which allows them to soar free over the Colorado River. You may also see Mexican spotted owls, Southwestern willow flycatchers, and Peregrine falcons.

While there, be sure to visit: 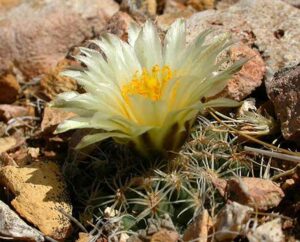 Scenic Airways offers flights into Page. You can rent a car and drive on from there.

Find lodging in nearby Page or the lodges in the Marble Canyon and Lee’s Ferry locations including Marble Canyon Lodge, Cliff Dweller’s Lodge and Lees Ferry Lodge at Vermillion Cliffs. Hotels in Flagstaff are a two-hour drive south on US 89.

Register To Win The Staycation

The Summer Is The Time To Buy These Items

Accessible Adventures in Arizona Available to Everyone