Thank you for visiting Rosie On The House, the online home to Arizona's longest running weekend radio broadcast!
Rosie On The House > Blog > Uncategorized > FIVE MUST-DO FIXES IN YOUR AGING HOUSE

When you moved into your house 10 years ago, you promised yourself you’d update the place. But like most homeowners, the longer you live there, the less you notice the 40-year-old light fixtures, the wallpaper from the 1970s, and the sunken living room.

Even if you feel comfortable in your current home, when it comes time to sell, you could have some big problems. Here are five fixes you may have to make and some suggestions on how they can be repaired. But do them now so you can enjoy the improvements before you sell your home.

1 | Fill in the sunken living room.

Sunken living rooms were all the rage in the 1950s and 1960s; to some extent they are popular today with some folks. But they do present some problems. Most of them take up a whole living space that can be a step of from six to eight inches down from another room. That can be a hazard for aging baby boomers and small children.

But you can raise the level of the floor to fill in the sunken room. After you empty the living room of furniture and remove any flooring covering the concrete slab, have a termite inspection. Get the area treated for termites to avoid future problems. Then you have to remove all of the wood pieces surrounding the old floor, including baseboards and stairs.

A contractor may have to adjust some things in the surrounding walls as well, like raising electrical outlets and switches, but eventually workers will bring in the aggregate base course and new concrete to fill the sunken area. The new concrete can sometimes be pumped in, depending on the distance from the street where the concrete truck will be and your living room.

You want to match the new subfloor’s height to that of the subfloor in the adjoining room. You may also have to match the flooring in both areas – like tiles that run through the living room into a hallway. You can stay in the house while all this is going on, says Don Brees, a contractor with Rosie on the House. “But it’s going to be slightly humid for the next couple of weeks because of the wet concrete that was placed there,” he said.

2 | Get rid of the fluorescent lights put in recessed can lights.

Maybe a box was built into the ceiling over your kitchen or bathroom and was covered with sheets of plastic. Behind the plastic, a builder hung fluorescent lights. Now you’d like to switch to individual recessed can lights. You shouldn’t just build the can lights into the empty box as they would cast unsightly shadows. In a case like that you have to do some electrical work and insulation to provide connections for new lighting, but you also have to put in new sheetrock to create a level ceiling.

If you’re just removing a fluorescent fixture that’s on top of a level ceiling, you only need to remove the old fixture and rewire and insulate for the can lights. Some painting will have to be done in both cases.

3 | Replace all your original toilets even if you don’t remodel the room itself.

A 20- to 30-year-old toilet will be less efficient than newer models. Modern toilets use significantly less water and a new one can enhance the appearance of a bathroom. They come in many different shapes now than they used to. So if you choose a new one that is smaller and shaped differently, you might have to change the flooring to fit the new fixture.

4 | Replace all the shiny brass or brass-colored hardware on doors and cabinets.

That gleaming brass went out of style some time ago because we overdid it with brass everywhere in our houses in the 1980s. Antique brass is popular now, and so are pewter, chrome and brushed nickel. This is another do-it-yourself project that could take a while, but once it’s done, you’ll be amazed at the change in the house. While you’re at it, change the lighting chandeliers to match the new metal.

5 | Turn your carport into a garage.

You can’t just put up walls on a slab under your wide open 1950s era carport or you could have flooding problems in the next big storm. Your contractor must build up a masonry stem wall that is about six to eight inches high, around the perimeter of the concrete slab of the carport/garage. A concrete block system can be used to do this, but don’t skip this step. If you use wood, instead of masonry, for the stem wall you can end up with mildew, dry rot and termites. For a wood wall construction, a series of 2×4 plates, studs and bearing posts needs to be tightly installed on top of the stem wall to support the roof and walls. (For more photos and more step-by-steps click here.)

WHAT ARE SOME STEPS I CAN TAKE TO SAVE MONEY ON MY ELECTRIC BILL BY RUNNING MY POOL PUMP MORE EFFICIENTLY?

HOW CAN I UPDATE MY CONCRETE PATIO’S LOOK? 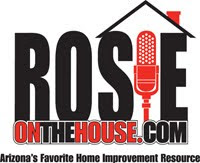 WHAT ARE SOME GUIDELINES FOR A BACKYARD PLAYGROUND?

THE TOUGHEST STUFF TO GROW IN ARIZONA

ANTS: GET RID OF THEM!

A NEW LOOK AT VINYL WINDOWS

WHAT KIND OF TOOLS ARE RIGHT FOR WOMEN DIYERS?

20 WAYS TO TRIM YOUR ENERGY BILLS!

UPS AND DOWNS IN THE LIFE OF A PLUMBER

WINDOWS: WHAT TERMS YOU NEED TO KNOW BEFORE YOU SHOP