Thank you for visiting Rosie On The House, the online home to Arizona's longest running weekend radio broadcast!
Rosie On The House > Blog > Extermination | Pest Control > FIVE URBAN PESTS AND HOW TO HANDLE THEM

FIVE URBAN PESTS AND HOW TO HANDLE THEM

We all love the wild side of Arizona, but sometimes it gets a little messy and/or dangerous, like a javelina tearing up all the newly planted yuccas for a midnight snack or a coyote biting a dog.

Here is advice on wildlife from Darren Julian, Urban Wildlife Specialist with Arizona Game and Fish Department, on keeping these nuisances away from your home. All these critters are protected by law. The animals classified as big game species can only be taken during specific seasons with a species-specific tag and a valid Arizona hunting license.

They look like wild pigs, but javelinas are peccaries, hooved mammals that traveled from South America into Central and Southern Arizona and are now even living near Flagstaff. They roam in small herds, coming out at night to eat flowers, tender cacti, succulents, bulbs, tubers, mesquite beans, fruits, nuts and seeds. They love digging up newly planted grass. They are “big game” in the eyes of the state and can only be hunted with a special permit in limited areas. Some chefs claim javelinas are delicious. But they carry rabies or distemper and may attack dogs when threatened.

How to control javelinas:

According to Julian, when humans move into the desert near wildlife, we modify the environment to make it livable, which in turn provides attractive opportunities for javelinas and other animals. “They eat seeds put out for birds or pet food put outside,” Julian said.

Drought doesn’t bother them because they know where your swimming pool is or where the golf course pond is located. Human-javelina conflicts occur when they find attractive food, like pumpkins at your front door for Halloween or dog food in the backyard.

Fencing off attractive plants can work. Electric fencing about 8-10 inches off the ground is ideal, inexpensive, and sold at farm and ranch stores.

Make javelinas afraid of you and your home. If you encounter them, don’t get too close, but spray them with a “super soaker” type squirt gun of diluted household ammonia, about 10 to 20 percent mixed with water. Pepper spray will also work but may cause more irritation to the person spraying than the animal. These chemicals irritate animals’ noses and eyes, but do no long-term damage. “By spraying with an irritant, you are conditioning them to avoid the location and people,” Julian said.

Liquids and powders that mimic coyote urine are sold in nurseries. They can be sprinkled around your sidewalks and plants, and homeowners report some success with those products in scaring off javelinas, but sprinklers or rain can wash chemicals away. Julian also said they may attract coyotes to your house.

Speaking of coyotes, they are not a threatened or endangered species; they are predators and are subject to an open, year-round hunting season. But you need a valid license to hunt them, except when livestock is killed. Even then, state law forbids firing a gun within a quarter-mile of an occupied home or building. Some cities also have strict rules against shooting off firearms.

How to control coyotes:

Just as with javelinas, coyotes love yards with fruit and wildlife to eat. They gobble up leftover dog and cat food. They knock over garbage cans to eat leftover pizza. They travel and hunt solo or in pairs, but can work together as a family unit (male, female and youngsters).

Don’t feed them; discourage neighbors who feed them. Don’t leave small pets alone in the yard; coyotes can jump up on concrete block walls to get lunch. They’ve been known to attack small dogs on retractable leashes even when pets are walking with an owner. If you must leave a dog outside, it should be in a secure enclosure.

If you run into a coyote near your house, make loud noises, bang pots and pans or throw small stones. Spray the coyote with a hose, or use the diluted ammonia mixture as with javelinas. When out on a walk, carry a golf club or walking stick or walk with others. Be aware of your surroundings and keep pets close.

If you have lots of coyotes in the neighborhood, you probably have lots of rabbits. And though coyotes – and owls and hawks – work hard to control them, rabbits still eat lots of landscaping during their short lives. They raid vegetable beds, rose gardens and grass lawns.

How to control rabbits:

Fencing off special planting zones is probably your best weapon against rabbits. Chemicals sprayed on grass can make it taste bitter. Trim the bottom of low-lying shrubs so they have few places to hide. Put pots of tasty plants on walls or shelves. Don’t feed rabbits.

We love the colorful woodpeckers of Arizona as long as they don’t pick our house to attack. At “Rosie on the House,” we get many calls from homeowners with these problems: Birds drill holes in stucco and boards and foam roofs in their constant hunt for bugs to eat; they can even damage beautiful trees. Sometimes they just get up on your metal chimney to start drumming away until the chimney cap looks like a dart board. Often one house on a block becomes a target and the rest are left alone, Julian said.

How to control woodpeckers:

They are looking for insects; possibly they’re finding termites in the wood on your house. So, check that out. The pounding on the chimney may be a territorial display to attract females or scare other males. To deter them, hang shiny ornaments or old CDs or strips of aluminum from your eaves or buy a kite shaped like a bird of prey to hang on a tree next to the house. Cover damaged areas of walls with thick plastic. Of course, that’s only a temporary answer. Spray the area they visit with a mixture of water and Tabasco. Of course, woodpeckers are migratory birds protected by state and federal law, so don’t harm them.

Deer are not prevalent in metropolitan Arizona except for places adjacent to large natural areas like Cave Creek and the McDowell Mountain Preserve. Those who get into housing areas will eat roses, flowers and bushes. Most feeding is at dawn and dusk.

How to control mule deer:

Fencing works best. Plant roses in your backyard where they will be protected. Many animal-loving homeowners attract them by leaving grain and oats out for the deer. Hunting deer is possible with a permit in a specific area and during specific seasons.

Darren Julian also told us: “Urban wildlife choose your area for two very important reasons: access to food resources and their comfort level living in a human dominated area. So control wildlife by restricting access to food sources and making them feel unwelcome and uncomfortable.”

He also notes that Arizona Revised Statues 13-2927 make it unlawful to feed wildlife (except for birds and tree squirrels). This law applies to counties with a population greater than 280,000 people. So, only Maricopa, Pima, and Pinal counties are affected. You can report unlawful feeding of wildlife to Operation Game Thief, 1-800-352-0700.

To change wildlife behavior, work with your neighbors, your neighborhood, and your community. According to Julian, “The more people removing attractants and ‘hazing’ wildlife, the quicker they will have results and those will be longer-lasting results.”

PROTECTING PETS FROM THE NAUGHTY SIDE OF NATURE

7 WAYS A HOMEOWNER CAN MAKE LIFE TOUGHER FOR TERMITES

CAN YOU BATTLE BUGS AND WEEDS THE ORGANIC WAY?

HOW TO MAKE YOUR HOUSE UNDESIRABLE – TO CRITTERS THAT IS!

BENEFICIAL BUGS WE MAY WANT IN OUR YARD

HOW TO FIGHT BACK AGAINST BUGS THAT SCARE US THE MOST 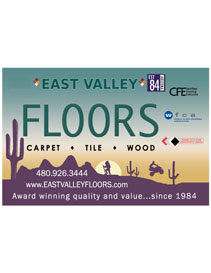 HOW CAN I REMOVE NAIL POLISH THAT SPILLED ON MY WOOD FLOOR?

How to Choose the Right Window & Door Company

FROM RATE DEADLINES TO BATTERY REBATES: 4 REASONS TO GO SOLAR!